Back to all posts

What Exactly Is A Sitar?

Although, like the guitar, the sitar is a string instrument, it belongs to a different stringed family. It belongs to the family of lute instruments. Lute instruments are defined buy their deep, hollow, rounded bodies/resonating chambers. A sitar’s body is made from a dried gourd fitted with a wooden faceplate.  This face plate and the neck of a sitar are created from either Tun Wood (a member of the mahogany family) or Teak. 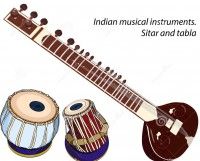 The musician plays seated holding the instrument at 45 degrees while plucking the strings with a metal pick called a mezrab. A sitar has between 18-21 strings, 9-13 of these are sympathetic strings which resonate in sympathy with played strings. Sympathetic stings are housed under 20 arched, movable frets, (pictured below this paragraph) while played strings run over these frets. Played strings begin at the bottom of the instrument, running over a large bridge then terminating at tuning pegs towards the top of the sitar’s neck. Sympathetic strings begin at the bottom of the sitar then run over a smaller bridge, terminating at tuning pegs along the side of the neck 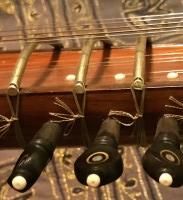 A sitar’s unique sound is created by it’s flat wide bridge with a gently sloped surface. Both the sound produced as the string vibrates along the bridge and the maintenance of the bridge are referred to as jawari. When translated jawari means ‘to bring to life’.

Currently the Sitar is the most popular instrument in the Hindustani areas of Pakistan and India, frequently appearing in Bollywood films. Often times a sitar forms in ensemble with tabla (Indian drums) and/or tambura (another Indian lute). Contemporary sitar music is divided into two schools, the Ravi Shankar school and the Vilayat Khan school. Each school has its own tuning system, playing style and type of sitar. One notable difference between them is the inclusion of bass strings on Ravi Shankar sitars. Ravi Shankar sitars also have a second resonation chamber called the upper toomba. The upper toomba of a sitar is pictured below.